Stachybotrys chartarum,(/stæki?'b?tr?s/ /t???r't??r?m/, stak-ee-BO-tris char-TARE-?m) also known as black mold or toxic black mold, is a variety of microfungus that produces its conidia in slime heads. It is sometimes found in soil and grain, but the mold is most often detected in cellulose-rich building materials from damp or water-damaged buildings. S. chartarum was originally discovered on the wall of a house in Prague in 1837 by Czech mycologist August Carl Joseph Corda. It requires very high moisture levels in order to grow and is associated with wet gypsum material and wallpaper.

S. chartarum is a slow-growing mold that does not compete well with other molds. It is only rarely found in nature, and seldom encounters the kind of large-scale living environment occasionally produced by human habitation (i.e., large amounts of cellulose, large temperature fluctuations, low nitrogen, no other molds, no sunlight, and ample constant humidity). The spores are only released into the ambient air when the mold is mechanically disturbed, particularly when wet. It is considered an uncommon contaminant of most indoor air.

Not all strains of S. chartarum produce mycotoxins, and under certain conditions some of these lose the ability to produce such toxins over time; the presence of high indoor humidity does not imply that mycotoxin-producing S. chartarum is also present; even intense exposure in a laboratory setting of rats to vapors from walls entirely covered in S. chartarum resulted in few notable biological effects (possibly because the air contained almost no spores, possibly because the walls were not disturbed during the experiment). In another experiment, mice exposed to concentrations of mycotoxins from S. chartarum much greater than a human could obtain in any living environment showed no ill effects. According to one author, "These studies suggest that the concentrations of airborne spores of S. chartarum realistically obtainable in indoor air are too low to produce clinical effects."

Claims of health problems related to this mold have been documented in humans and animals since the 1930s. More recently, S. chartarum has been linked with so-called sick building syndrome. However, the link has not been firmly established in the scientific literature.

In 1994 the US Center for Disease Control verified that a number of infants in Cleveland, Ohio became sick, and some died from pulmonary hemosiderosis (bleeding in the lungs) following exposure to unusually high levels of S. chartarum spores.

In 2007 the journal Veterinary Forum published an article reporting that two cats had died under anesthesia in what is believed to be the first documented case of black mold poisoning in pets. The cats had been living in Florida in a water damaged home. During routine dental procedures both cats experienced severe pulmonary hemorrhage and later died. Blood tests confirmed the presence of a toxin produced by S. chartarum, and severe mold contamination was found in the home.

For more information and sources: https://en.wikipedia.org/wiki/Stachybotrys_chartarum

Found Mold in Your Business or Home? Know What You Are Dealing With. 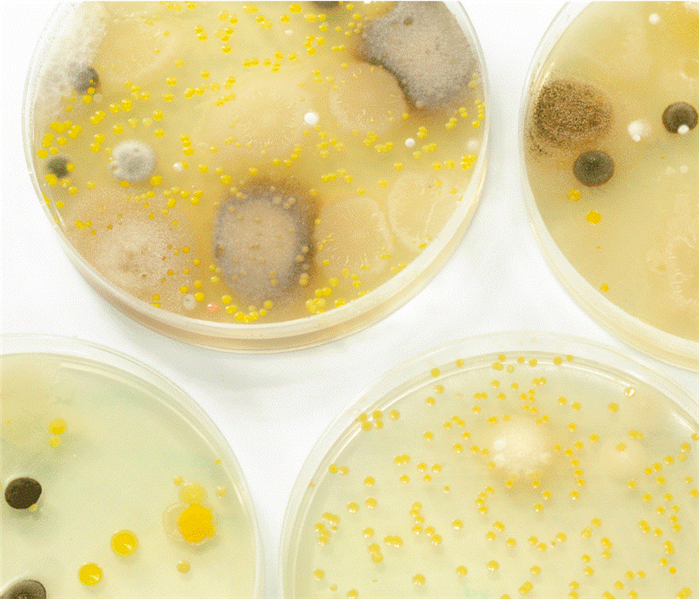 Picture of Common Types of Mold Taken From https://moldhelpforyou.com/types-of-mold/

Finding mold in your home or commercial property can be scary, but with a little information you can get a better understanding about what you are dealing with.

Common Molds and Where They Can Be Found

If you suspect you have a mold issue in your home or at your business, give SERVPRO of Williamsport/Montoursville a call at (570) 546-3500!